"There is something magical in seeing what you can do, what texture and tone and colour you can produce merely with a pen point and a bottle of ink." 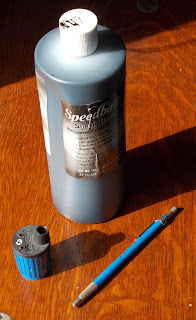 Nearly one litre of ink;
pencil and sharpener for scale.

I bought this large bottle of ink back in 2007 when I was working on my second comic book, Weak Species –which was supposed to be an ongoing series, but never made it past issue #1 (but TONS of sketches, ideas, designs, for several further issues exist). Comics are labour and time intensive and I had other art projects to work on, so this bottle was put in storage; any ink I needed for illustrations in the meantime was found in the several little jars I still had (see previous post).

I just did some tests and, despite being roughly five years old, the ink is still good (thankfully, I'd kept it wrapped in two plastic bags since day one in case of spillage).

TO BUY A PAINTING:

All paintings $100 + shipping, $50 from each sale donated to the Firelight Lantern Festival. Click on DONATE to start transaction. Shipping: $25 Canada, $35 USA/Int’l. Avoid shipping costs: pick up at Small Pond Arts or meet up in Toronto December 21.